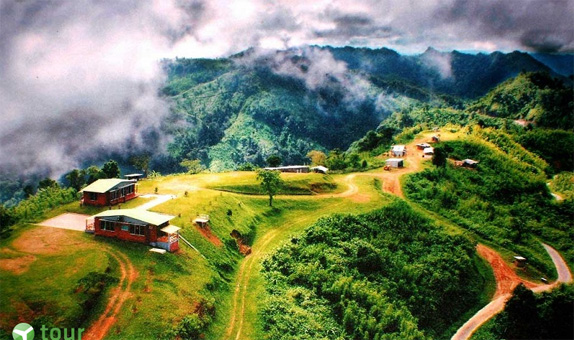 The Hill Tracts is divided into three districts, namely Rangamati, Khagrachari and Bandarban. From Chattogram (previous Chittagang) 77 km. road amidst green fields and winding hills will take you to Rangamati, the headquarters of the Rangamati Hill District which is a wonderful repository of scenic splendours with flora and fauna of varied descriptions. It is also connected by water way from Kaptai.

The Hills: The Hill Tracts is divided into four valleys surrounded by the Feni, Karnaphuli, Sangu (Sankhu) and Matamuhuri rivers and their tributaries. The ranges or hills of the Hill Tracts rise steeply thus looking far more impressive than what their height would imply and extend in long narrow ridges. The highest peaks on the northern side are Thangnang, Langliang and Khantiang while those on the southern side are Ramu,Taung, Keekradang (3000 ft, highest in Bangladesh), Mowdok Mual, Rang Tlang and Mowdok Tlang.

The Lakes: Famous Kaptai Lake, the largest “man-made” lake, spreading over 680 sq. km. of crystal-clean water flanked by hills and evergreen forests lies in the Rangamati Hill District. The Lake was formed when the Karnaphuli river dam (153 feet high, 1800 feet long crest) was built for the purpose of hydroelectric power project at Kaptai. The old Rangamati town was submerged under lake water and a new town had to be built later. The Lake is full of fish and provides facilities for cruising, swimming and skiing. There are also facilities for angling and short trip by Sampan, local name for country boats.

The Forests: The valleys of the Hill Tracts are covered with thick planted forests. The vegetation in semi-evergreen to tropical evergreen dominated by talk teak trees. The natural vegetation can be seen best in the Rain- khyong valleys of the Bandarban district. This district provides the country with valuable wood used for various purposes, besides supplying wood and bamboo for the Karnaphuli Paper Mills and the Rayon Mills situated at Chandraghona. Here a tourist may be lucky to see how huge logs of wood are being carried to the plain by the tamed elephants.

Climate: There are three main seasons, the dry season (November to March), which is relatively cool, sunny and dry, the premonsoon season (April and May), which is very hot and sunny with occasional shower, and the rainy season (June to October), which is warm, cloudy and wet.

Tribal life: The inhabitants of the Hill Tracts are mostly tribal. Life of the tribal people is extremly fascinating. Majority of them are Buddhists and the rest are Hindus, Christains and Animists. Despite the bondage of religion, elements of primitiveness is strongly displayed in their rites, rituals and everyday life. The tribal families are matriarchal. The women-folk are more hard-working than the males and they are the main productive force. The tribal people are extremly self-reliant, they grow their own food, their girls weave their own clothes and generally speaking, they live a simple life. Each tribe has its own dialect, distinctive dress and rites and rituals. The common feature is their way of life which still speak of their main occupation. Some of them take pride in hunting with bows and arrows. Tribal women are very skilful in making beautiful handicrafts. Tribal people are generally peace loving, honest and hospitable. They usually greet a tourist with a smile.

Places of interest in Hill Districts: For visit of foreign tourists to the Hill Districts prior permission from the Government is required which can be arranged through BPC.

Rangamati: Rangamati, the focal point of Rangamati Hill District, is connected with Chattogram by a 77 km. metalled road. The township is located on the western bank of the Kaptai Lake. Rangamati is a favourite holiday resort because of its beautiful landscape, scenic beauty, its flora and fauna, homespun textiles, bamboo handbags, flower vases and silver jewllery and the tribal men and women who fashion them, are other attractions. The tribal handicraft factory and sales centre run by BSCIC produces many varities of souvenirs made of bamboo, cane, straw, textile and leather. For the tourists the attractions of Rangamati are numerous tribal life, fishing, speed-boat cruising, water-skiing, hiking or merely enjoying nature as it is. Other places worth visiting include, Tribal Museum, Bein Textile Factory and Sales Centre, Kalpataru, Ivory product shop, Hanging Bridge, Tribal village, Chakma Raj Bari (King’s palace), Weekly Hat (market). Above all tribal dance and music captivate visitors which can be organised by Bangaldesh Parjatan Corporation if prior notice is given.

Kaptai: A pleasant and picutresque drive of 64 km. from Chattogram brings you to a huge expanse of emerald and blue water ringed with majestic tropical forests. It is the famous Kaptai Lake. Only 3 km. from Kaptai along the Chattogram Road, Lies the ancient Chit Morong Buddhist Temple where there is beautiful Buddhist statues. An annual Buddhist festival is held here on the last day of Bengali year (Mid-Aprill).

Chandraghona: Fortyeight Kilometer from Chattogram, on the Kaptai Road is Chandraghona where one of the biggest paper mills in Asia is located. Close to the paper mill there is a rayon factory which produces synthetic fibres from bamboo.

Khagrachari: Khagrachari is the district headquarters of Khagrachari Hill District. A drive of 112 km. from Chattogram, by an all-weather metalled road through the green forest brings you to Khagrachari, abode of fascinating clam. For the tourists seeking nature in here restful mood, Khagrachari is an ideal spot.

Bandarban: Ninetytwo kilometer from Chattogram by metalled road, Bandarban is the district headquarters of the Bandarban Hill District. Bandarban is the home town of the Bohmong Chief who is the head of the Mogh tribe. The Moghs are of Myanmar origin and Buddhists by religion. Jovial and carefree by nature, the Moghs are simple and hospitable people. Bandarban is also the home of the Murangs who are famous for their music and dance. Far into the interior there are several other tribes of great interest for anyone who cares to make the journey.

Bangladesh Parjatan corporation, the National Tourism Organization has created a number of facilites for the tourists at Rangamati holiday resorts.These are: