Bangladesh Economy at a Glance

Bangladesh – The Next Asian Tiger

The economy has observed sustainable economic growth, exports have increased and foreign reserves have flourished over the decade in spite of the global economic crisis in 2008-09 and a series of natural disasters, to which Bangladesh is regularly susceptible. The Gross Domestic Product (GDP) of Bangladesh was worth US$ 174 billion in 2014. Bangladesh has experienced average GDP growth rate of 6 percent over the decade. The average growth rate is projected at 7.4 percent over the Seventh Five Year Plan (2016-2020) period. Bangladesh exports increased to about US$ 35 billion in 2014, which is about 20 percent of GDP whereas, in 2009, the number was merely US$ 17 billion. Trade GDP ratio has progressed immensely and is now approximately 45 percent in 2014. The export friendly ecosystem in the country has played a vital role to make this shift happen.

There has been a remarkable advance in the growth of foreign remittances. In 2014, it exceeded US$ 15 billion, whereas, in 2009 the number was less than US$ 10 billion. In October 2015, Bangladesh foreign exchange reserves reached US$ 27 billion, which is the highest in the history of the country, and which is sufficient for about 6 months of import payment. The trend of foreign investment inflows suggests that investment in Bangladesh is on the rise in recent years. 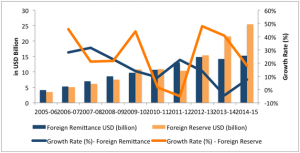 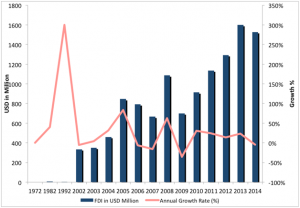 The World Investment Report 2015 also identifies that the country attracted Foreign Direct Investment (FDI) of US$1.53 billion in 2014. During the tenure of the current Prime Minister Sheikh Hasina, the Government has taken a number of large-scale development initiatives. Major projects include: Padma Bridge, Metro Rail, Nuclear Power Plant and Rampal Coal Power Project.