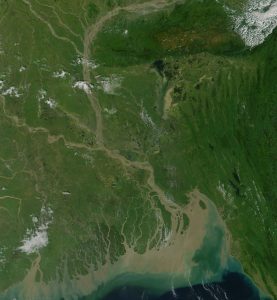 Bangladesh is in the low-lying Ganges–Brahmaputra River Delta or Ganges Delta. This delta is formed by the confluence of the Ganges (local name Padma or Pôdda), Brahmaputra (Jamuna or Jomuna also known as “Yamuna”), and Meghna rivers and their respective tributaries. The Ganges unites with the Jamuna (main channel of the Brahmaputra) and later joins the Meghna to eventually empty into the Bay of Bengal. The alluvial soil deposited by these rivers has created some of the most fertile plains in the world. Bangladesh has 57 trans-boundary rivers, making water issues politically complicated to resolve – in most cases as the lower riparian state to India. Most parts of Bangladesh are less than 12 m (39.4 ft) above the sea level, and it is believed that about 10% of the land would be flooded if the sea level were to rise by 1 m (3.28 ft).

In south east Bangladesh experiments have been done since the sixties to ‘build with nature’. By implementing cross dams, the natural accretion of silt has created new land. With Dutch funding, the Bangladeshi government began to help develop this new land in the late 1970s. The effort has since become a multiagency operation building roads, culverts, embankments, cyclone shelters, toilets and ponds, as well as distributing land to settlers. By fall 2010, the program will have allotted some 27,000 acres (10,927 ha) to 21,000 families.

The highest point in Bangladesh is in Mowdok range at 1,052 m (3,451 ft) in the Chattogram Hill Tracts to the southeast of the country.[50] Cox’s Bazar, south of the city of Chattogram, has a beach that stretches uninterrupted over 120 kilometres (75 mi).

Straddling the Tropic of Cancer, Bangladeshi climate is tropical with a mild winter from October to March, a hot, humid summer from March to June. A warm and humid monsoon season lasts from June to October and supplies most of the country’s rainfall. Natural calamities, such as floods, tropical cyclones, tornadoes, and tidal bores occur almost every year, combined with the effects of deforestation, soil degradation and erosion. The cyclones of 1970 and 1991 were particularly devastating. A cyclone that struck Bangladesh in 1991 killed some 140,000 people. 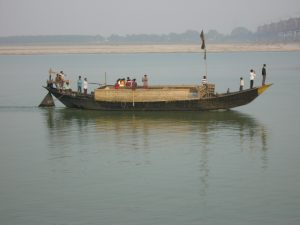 In September 1998, Bangladesh saw the most severe flooding in modern world history. As the Brahmaputra, the Ganges and Meghna spilt over and swallowed 300,000 houses, 9,700 kilometres (6,027 mi) of road and 2,700 kilometres (1,678 mi) of embankment 1,000 people were killed and 30 million more were made homeless with 135,000 cattle killed, 50 square kilometres (19.3 sq mi) of land destroyed and 11,000 kilometres (6,835 mi) of roads damaged or destroyed. Two-thirds of the country was underwater. There were several reasons for the severity of the flooding. Firstly, there were unusually high monsoon rains. Secondly, the Himalayas shed off an equally unusually high amount of melt water that year. Thirdly, trees that usually would have intercept rain water had been cut down for firewood or to make space for animals.

Bangladesh is now widely recognized to be one of the countries most vulnerable to climate change. Natural hazards that come from increased rainfall, rising sea levels, and tropical cyclones are expected to increase as climate change, each seriously affecting agriculture, water & food security, human health and shelter. It is believed that in the coming decades the rising sea level alone will create more than 20 million climate refugees. Bangladeshi water is contaminated with arsenic frequently because of the high arsenic contents in the soil. Up to 77 million people are exposed to toxic arsenic from drinking water. Bangladesh is among the countries most prone to natural floods, tornados and cyclones.

Birds of Bangladesh and Images for Birds