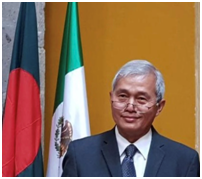 Ambassador Chakma assumed his assignment as Ambassador of Bangladesh to Mexico on December 2014. He also assigned as non-resident Bangladesh Ambassador to Ecuador, Panama, Honduras and Costa Rica.

Born in 1961, Ambassador Chakma has a Post Graduate degree in Marketing from the University of Dhaka. He attended the French Language and Diplomatic Training Programme at the Institute International d’Administration Public (ILAP) in Paris. He subsequently attended in a mid-level programme on Security Affairs at the Asia and Pacific Centre for Security Studies (APCSS) at Hawai, USA in 2001.

Ambassador Chakma joined in Bangladesh Foreign Service as a Bangladesh Civil Service 85 batch officer. His last posting abroad was as Ambassador of Bangladesh to Vietman (2009-2014) with concurrent accreditation to Laos. He has earlier served in various capacities in Morocco, Sri Lanka, Turkey and Belgium.

Before being posted abroad as Bangladesh Ambassador to Vietnam, Ambassador Chakma was looking after consular and welfare of Bangladeshi diaspora and countries under the ambit of East Asia. He was also Deputy Chief of Protocol in the Ministry.

Ambassador Chakma is married to Mrs. Nandita Chakma and blessed with two sons.